Joel Pett drew this cartoon in twelve years ago but it could easily have been drawn today. This speaks both to the so-far evergreen nature of GMOs and to the fact that a good cartoon stands the test of time. Of course, there can be changes with some issues and there are changes afoot due to the food movement. Who knows ... In twelve years this cartoon could be seen as having contributed to the formation of a consensus about GMOs.

Joel Pett is a winner of the Pulitzer Prize and his cartooning home is the Lexington Herald-Leader. He recently celebrated his thirty year anniversary at the newspaper which prompted him to look back through his extensive body of work. This reminded him that a cartoonist "faces regular reminders of the futility of their efforts yet they approach each new cartoon with a tenacity that is not dampened by the incessant nature of the challenge."

Pett likes that this cartoon uses a symbol of the American diet - hot dog - to make the point that people don't always know what they are eating and if they did they might feel differently about it. He also likes that it suggests that what some people find disgusting, others find appetizing.

This cartoon appears on p. 105 of Eat Drink Vote, in the chapter titled "Food Issues: Who Decides?" 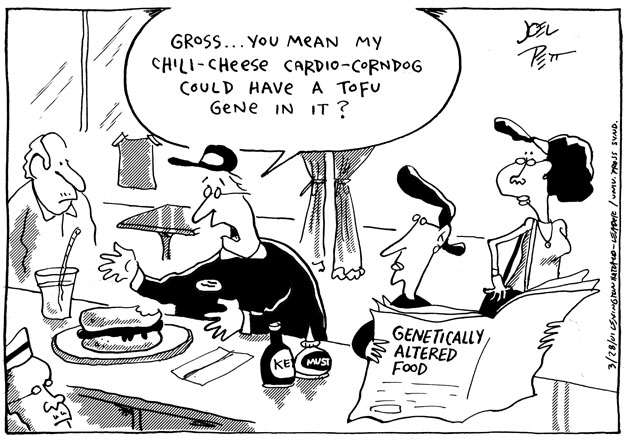 See other cartoons about GMOs and check out these groups that are working on issues related to GMOs.